While I was sharing this apartment with 4 different people in the central, we’d usually run into missing cake slices, bottles of soda and sometimes missing eggs.  I got ballistic when the bacon went missing! So we started sticking notes and somehow it worked — on some days, at least!

Stumbled upon some really funny notes today, which reminded me so much of how things were when living with someone else in a flat. From sandwich thief to doorbell trippers. It’s hilarious!

Here’s a few of them that we thought might give you some good laugh. After all, they say laughter is the best medicine. 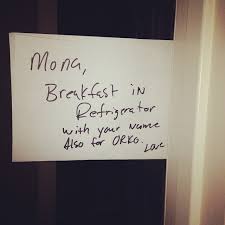 I can already picture out 2 dog dishes right next to each other, haha!

This is crazy!  How can someone return a sandwich eaten hours ago. I just hope this thief remembered pretty well what was in that sandwich.

To be sure, I’d suggest he leaves a note asking “What sandwich was that again? Would you like some extra TLC?” 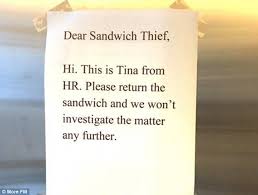 Please return the butter or risk eating everything with extra ingredient made of water,  electrolytes, mucus, glycoproteins, enzymes, and antibacterial compounds.

By the sounds of it, it doesn’t sound so gross after all. 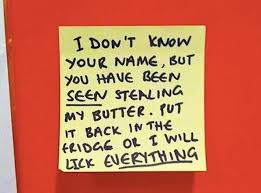 Must have cost a fortune. Do not get caught red handed or the bail will be more than your rent for an entire lifetime. An heirloom can be priceless to some, even if it’s a dime-worth to you.

Make sure to leave a thank you note for this one!

By far, the most thoughtful of all notes I have seen. He has the noblest of all intentions there is. 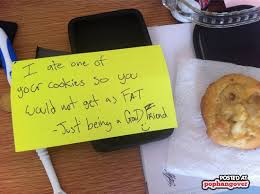 This little rugrat must’ve thought there’s not much on the topping. Try serving something else with lots of pepperoni, olives, anchovies and cheese! I’m sure there will be none left but your empty plate.

Most people would say this, which is quite expected but most often than not, they wouldn’t. So go right ahead and dig in.

….at your own free will. 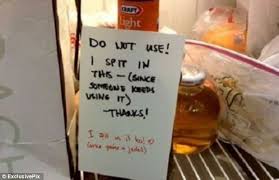 Saving the best for last…

I wonder if it  tasted kind of soapy or rancid, the least. But, whoever it was, just got his own dose  of nutrition. Well a Swiss restaurateur did put up a menu based around on cooked human milk  in his restaurant. So, I think it’s not bad after all, is it? 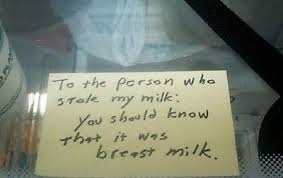