After a long long wait the world will witness the battle of the century, above the four corners of the boxing ring. The Filipino icon who rises from a poor family in General Santos City. He had struggled his way to become the famous boxer to date.

Manny “PACMAN” Paquiao will prove once and for all that he is the pound for pound best boxer of the world. Before Manny became what he is today, he fought one of his strongest peers, POVERTY! The man had to work anything in order to support himself and his family. He joined amateur boxing events and went to manila to pursue his dreams. He defeated many  famous names in boxing, Dela Hoya, Miguel Cotto, Ricky Hatton to name a few. This made him famous that every time he competes the venue is always full!

The greatest and undefeated Floyd “THE PRETTY BOY” Mayweather, Jr. He has a clean record to his credit. All wins with no losses or draw. Floyd is considered as the undefeated boxer. If he will defend his title against Manny, he will share throne with Rocky Marciano. Floyd has speed and tactics that made him won all his bouts. He is not a knockout puncher like Pacman, but he was able to combined good defense and a powerful attract. It’s going to be a jaw dropping event that the whole world is waiting for. Floyd will defend his record while Pacman will add Floyd to his records of champions that he had defeated! Muscles to muscles, punches against punches! MGM arena will make history again! The man left standing will tell the story that he is the winner of the battle of the century! 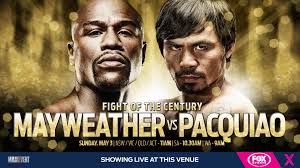