City Hall is also known as City Hall Loop, opened on October 27, 1904 and was the original southern terminal station of the first line of the New York City subway. The station is unusually elegant in architectural style and is unique among the original IRT stations, employing Romanesque Revival architecture. The platform and mezzanine feature Guastavino tile, skylights, colored glass tile work and brass chandelier.

On December 31, 1945, the station was discontinued making it a ghost station, although it is still used as a turning loop for 6 trains. In November 2009, Travel & Leisure magazine ranked the City Hall Station, 12th in its list of the most beautiful stations in the world. 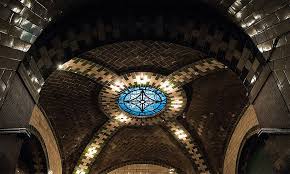